Why the U.K. Runs Empty Trains Every Day – From Monday through Saturday, at 5:16 P.M., a train takes off from Leeds and heads for the small English town of Snaith. At first, the cars will be jam-packed with people – the usual rush hour of a decent-sized city like Leeds. But with each stop along the way, you’ll notice fewer and fewer passengers on the train.

Once you get to the final stop 55 minutes later, there will be no one else besides you. You get off the train at a station that’s equally as deserted. There are no vending machines or ticket offices, no parking lots, no taxies. It’s as if time has stood still. It’s quiet…and eerie. You need to buy a return ticket in advance since you can’t get one in a station without personnel.

But you can only go back to Leeds at 7:01 P. M or 7:16 A. M the next day! Looks like you had two choices when you booked this exciting journey to Snaith: spend a mere 50 minutes hanging out in town and make the 7:01 train…or stay for the night and leave in the morning. Hope you found a motel here…

– How many ghost trains are there in the UK?
First, let’s establish one thing: the term “ghost train” doesn’t officially exist. It’s not like you can go on some website and type in “Two tickets for a ghost train”. And “ghost” doesn’t mean they’re haunted or anything. (Although, stick around till the end, and I’ll tell you about a REAL ghost train!) Anyway, these empty trains are listed in all documents as ordinary trains, so there’s no way to know how many there are.

To find them, you need to search timetables for routes that trains travel no more than twice a day. And their schedule is almost always incredibly inconvenient: departure just before dawn and sometimes no return train at all! And unlike the daily Leeds-Snaith journey, some ghost trains run only once a week! Not all ticket sellers are even aware of such routes! If you find a ghost train full of people, they’re most likely adventure-seekers like you! That, or they’re… 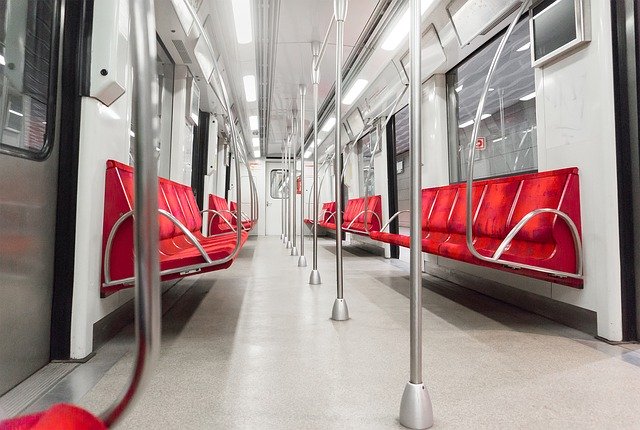 – The Ghost Station Hunters!
Doesn’t exactly have the same ring to it as “Ghostbusters” but still an interesting way to spend your time! Tim Hall-Smith and Liz Morali are passionate about ghost trains. Over the past 25+ years, they’ve been to almost 50 ghost stations. Is that an impressive number or just a drop in the bucket?

Again, hard to say!We don’t know how many there are. Still, the dynamic duo takes pictures at each of the stations and gets a kick out of surprising the train guard each time they ask to get off at some station that probably hasn’t seen a traveler in months or even years! Does ghost train hunting sound like something you’d be interested in? Let me know down in the comments!

– Why are the trains empty?
The use of passenger trains has almost doubled since 1995. More travelers are riding longer distances, yet the number of trains hasn’t gone up that much. What does that mean? There should be a ton of congestion! You know, riding elbow-to-elbow and stepping on people’s feet! “Sorry!” So, how is it possible that ghost trains exist?

Well, most of the final-stop stations are far from town. For example, the one where Tim the Ghost Station Man celebrated his 50th birthday was more than 3 miles from a road, and the nearest building was an old mill. In other words, ghost stations are primarily in ghost towns. Most passengers have already hopped off by the time the train gets to the final stop because, well, nobody lives there! Then…

– Why keep them running?
Surprisingly, it’s more profitable for rail companies to keep ghost trains running than to close them. To shut down any route, they’d first have to figure out how this closure will affect passengers, the transport environment, and the economy. They send the results of this research to the Department for Transport and the media 6 months before the proposed closure!

Add to all that a bunch of bureaucracy, public events, hearings, voting consultations, and other complicated procedures that require a lot of time and effort. Why do that when you can safely run a train  once a week and have nothing to worry about? Makes sense.

– Hope for the future?
There is a more positive reason why these trains continue to run – the hope that these lines will get busier. Just imagine that you’re a major rail company, and you’ve spent all this time and effort closing a route. But then, some faraway town or village starts building houses, malls, infrastructure, and other facilities not far from your ghost station!

What then? Again, examinations, reports, training new staff, and updating the tracks since you stopped using them and they most likely need a remodel. It’s just not worth the risk! Especially when you have cities getting overcrowded and people looking to move further away from the hustle and bustle. Sometimes it’s easier and cheaper to leave things as they are than to start all over from scratch.

– Rebirth!
So, is that hope for a revival of old ghost lines worth keeping? Sure! Some routes are already seeing increased activity. For example, there’s the Halton Curve, a tiny stretch connecting the two tracks with regular trains between North Wales and Liverpool. The route was never closed, but it did need some restoration… about ten and a half million pounds-worth, to be precise! And the Halton Curve is just the beginning. The number of passengers will increase, and ghost trains will likely become fewer and fewer.

– In other countries
Yes, ghost trains are a common thing for UK residents, much more so than most other countries. Elsewhere, an empty train can seriously scare passengers. That’s exactly what happened in 2016 in Belgium. Travelers waiting on the platform witnessed a train without a driver and passengers slowly passing through stations.

Rumors about a real ghost train instantly began to spread, but the truth was far from the paranormal. Not long after an empty train departed for the city of Louvain, the driver noticed a malfunction. He stopped the train and got out of the cab to investigate. But, for some reason, the train took off on its own, something that’s unprecedented without the driver!He couldn’t get back in the cabin, and the machine just kept going!

Fortunately, it all ended well despite being pretty cinematic! The driver warned his coworkers about the runaway train, so the passengers at upcoming stations were evacuated. The train rode 7 and a half miles until another driver jumped into the moving cab and was able to stop it. Happy ending!

– The Real Ghost Train
And now, as promised, the most famous and mysterious legend about a ghost train. It happened in the summer of 1911. An Italian rail company called Zanetti sent a small tourist train with about 100 passengers to travel around the country. The trip was going fine until the train drove into a mountain tunnel in Lombardy, a northern region in Italy.

It entered the tunnel but never made it out the other side! Apparently, as the train approached the mountain, a thick white fog suddenly surrounded it. Panic started in the car, and that’s when 2 quick-thinking passengers decided to jumpout at the last minute. The tunnel was thoroughly investigated.

There weren’t any signs of a crash, there wasn’t a shred of evidence a train had entered it. It’s as if it just disappeared right there at the entrance! After that, the tunnel was closed off and then completely destroyed. But it doesn’t end there… The mysterious disappearance of the Zanetti train was almost forgotten when 30 years later, new evidence surfaced…. on the other side of the planet!

Apparently, 100 Italian citizens showed up out of nowhere in Mexico City and were admitted to a hospital for shock. They were strangely dressed…as if they were from the past. Not only that, people from different parts of the world reported that they’d seen the ghost train. Of course, all these rumors aren’t confirmed, and it could simply be an urban legend. I guess we’ll never know…Of COURSE we know, it is an urban legend – but it is a cool story.

Why Nobody Can Survive in the North Pole