What Small Triangles Above Your Airplane Seats Mean – Many of us think Flying is a great way to travel, but things can get dull if you windup stuck on the tarmac waiting for takeoff. While you’re sitting there wondering if it would’ve taken any longer just to drive,you might notice a little triangular sticker above your window.

Now, if you’ve never noticed the stickers, don’t think you’re just unobservant. Only four windows on each plane are marked this way. Usually red or black, the decals are just large enough to spot if you’re looking for them, but easy enough to miss if you aren’t. But why are they there?Is it part of a conspiracy? Are those the seats reserved for Illuminati members? It turns out the answer isn’t quite so dramatic.

If you look closely the next time you’re on a plane, you’ll realize that the triangles line up with the front and back edges of the aircraft’s wings. This comes in handy whenever the flight crew needs to check the wings for ice or to make sure the flaps are functioning properly. The sticker is there so that the flight attendants know at a glance which windows to look through. 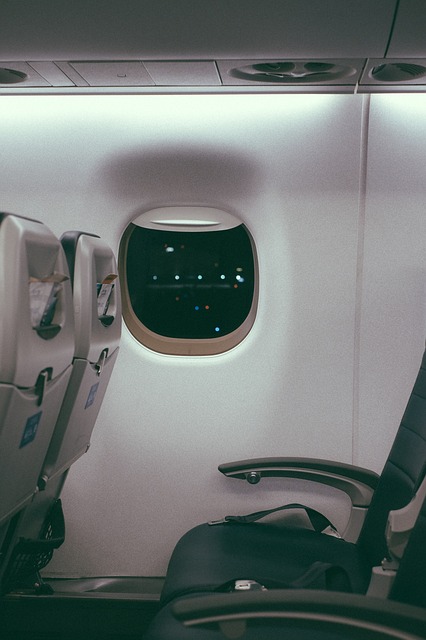 You wouldn’t want them having to climb over a dozen passengers just to get a decent view, would you? Flight attendants have a stressful job that means long hours far from home. Sure, free flights to exotic locations might seem exciting, but one night in an airport hotel isn’t exactly a dream vacation.

Number one: Hidden Sleeping Compartments Flying is, by far, the fastest way to travel, but fastest can be a relative term. If you’ve ever sat through a fourteen-hour flight to Australia, you know “long haul”doesn’t even begin to cover it. Even when your flight isn’t that insanely long, it might be tempting to nod off if you’rein the air for more than a few hours.

The same is true for the pilots and flight attendants, and many airliners feature a hidden compartment where its exhausted crew can catch up on some much-needed sleep. The exact placement of the room varies, but the crew’s quarters are usually found in a small windowless compartment directly above first class.

The size and design can vary wildly from airline to airline, ranging from a single room lined with bunks, to partitioned sleeping compartments. Most feature some degree of soundproofing, and basic conveniences, such as mirrors and cabinets. A few higher-end aircraft even come complete with music players and other entertainment systems.

The bunk room is usually accessible from a narrow stairway or ladder directly behind the aircraft’s cockpit. And when I call these rooms hidden, I mean hidden. Typically, the entrance is concealed behind a panel in the crew area of the plane, but some take camouflage a step further. The Boeing 773, for example, hides the hatch by disguising it as an overhead luggage compartment.

Talk about a commitment to secrecy. Forget what I said earlier, are we sure the Illuminati had nothing to do with this? Larger planes can feature up to ten bunks, as well as a separate pilot’s quarters directly above the cockpit. These cabins can be quite a bit roomier than the flight attendant’s quarters. Some airlines even offer their pilots amenities, such as business class seats and even a private bathroom. Talk about flying in style.

Number two: Loops on the wings By the way, when you were looking at those triangles earlier, did you happen to spare a glance out the window itself? If you’re flying in a jet made by Airbus, you might’ve noticed a pair of little yellow loops sticking up from the otherwise smooth, white surface of the plane’s wing.

Clearly it was put there for a reason, but what could that reason be? Well, you’re probably aware of those inflatable slides many airliners are equipped with. They’re used to evacuate quickly in the event of an emergency or crash landing. They also add a bit of fun to air disasters, although that’s more of a side benefit rather than an intended function.

The thing is, some of the engineers at Airbus noticed a flaw in this system. A plane’s wings need to be smooth so that they remain aerodynamic, but that makes them pretty difficult to stand on. This is especially true if the wings are wet, either due to rain or having been forced to make a water landing. Nobody wants to escape injury from a plane crash only to slip on a wet floor, so something needed to be done.

Their solution was a brilliant display of technical ingenuity. A rope. An emergency escape rope is secured to the plane on one end and the forward loop on the other. A second rope would then be attached to the rear loop and lead back toward the slide. Thanks to this fabulous technological breakthrough, evacuating passengers need not worry about an unfortunate tumble down the aircraft’s wings.

Number Three: Holes in the Windows While you were examining the enigma on your plane’s wings, did you happen to pay much attention to the window you were peering out from? Look closely at the bottom, and you’ll notice a tiny, circular hole in the glass. It’s pretty small, so you might not have seen it without the circle of frost that often forms around it.

Airliners need to maintain internal pressure for the passengers to be able to breathe comfortably at high altitudes. With that in mind, a hole in the windows might seem to be a bit counterproductive. It turns out though, the opposite is actually true. This tiny opening is known as a breather hole and plays a vital role in keeping you flying.

It might not appear so at first glance, but each of the plane’s windows is made from three panes of glass, layered on top of each other. The innermost pane is called the scratch pane and exists mainly to keep passengers from damaging the other two. The outer layer bears the bulk of the pressure, with the hole being in the middle pane.

This creates a small pocket of air inside the window, equalizing the pressure between the cabin and the space between the panes. This reduces the amount of force the glass is under, drastically reducing the possibility of failure. If only holes made my shirt more stable, I’d have an excuse not to buy new clothes. Yeah, I don’t know what that means either.

Number four: the hidden handrail While you were watching the flight attendants in hopes of spotting their covert nap times, you might’ve noticed they often walk with their hands running along the bottom of the overhead bins, like they’re checking for somebody’s gum, or something. That might seem like an odd thing to do, but it makes sense once you look closely at the spot they’re holding on to.

Most airliners flying today feature a handrail running the length of the overhead compartments. Their primary function is so that the crew can safely move about the cabin during turbulence. And that’s a good thing, because if passengers complain about the flight attendants not arriving quickly enough, imagine how they’d feel when one collapses on top of them.

These handrails also provide an alternative to grabbing someone else’s seat when you have to get up to use the restroom. I mean, don’t you just hate when that happens? Coach is cramped enough without someone’s fingers materializing behind my head! Ah hem, ‘scuse me. Speaking of limited room, our next entry might just offer you a bit of help with that.

Number five: a button to adjust your armrest The most common complaint people have with air travel is the lack of space. Even if you aren’t particularly tall, you’ve probably experienced this for yourself. If you are particularly tall, then get ready to be constantly bumping your knees on the tray table and banging your shins on the chair in front of you.

So, what can you do about this shortage of legroom? Well, that depends on where you’re sitting. If you’re in the window seat, you’ll just have to accept the breathtaking view as a consolation prize. If you’re in the middle seat, well, you’re just going to have to deal with getting the worst of both worlds.

That’s right middle seat passengers, you’re the lucky winners of no view, no room, and having people brush past you whenever they need to get up. However, if you’re in the aisle seat, I’ve got some good news for you. You know that uncomfortable little armrest of yours? That little bit of plastic that digs into your side and keeps you from moving your legs freely?

You probably assume that it was never intended to be moved, and getting it out of your way would take some serious work with a wrench and screwdriver. It turns out that’s not the case. Feel around on the bottom of the armrest, and you’ll find a little button near the hinge. Press it, and you’re free to move that pesky armrest out of your way. This gives you plenty of room to move around, and is a big help when you’re trying to get your bag from the overhead compartment at the end of your flight.

So, are there any special features I missed in our little rundown of airline secrets? Let me know in the comments.