We Could Go to Space Without Rockets – Nowadays, the only way to get to space is a rocket. But apparently, in the near future, there might be some new and bizarre ways to leave the Earth’s atmosphere. Because, space elevators? Balloons? Catapults?Are you for real? In any case, here are 10 innovative ways to get to space. 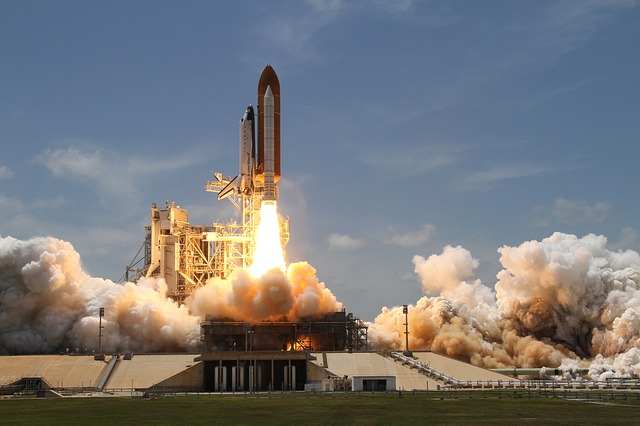 1. A Catapult
This so-called catapult is actually a massive centrifuge, spinning at high speed. The speed is so great, that when the catapult swings a payload into space, it reaches aw hopping speed of 3,000 miles per hour! NASA once tested similar technology but, eventually, came to the conclusion that it was less reliable than good old rockets. The main challenge for the catapult technology is the strong air resistance, which could prevent the load from jostling through the upper atmosphere.

2. A Space Elevator
Yep, I’m talking about a real elevator that’s supposed to go all the way from Earth to space. It would be connected to an asteroid or a space station by four to six massive cables. I’ll bet. The bottom ends of these cables would be fixed to a 30-mile-tall tower on the ground. The elevator itself would travel from platform to platform at a speed of thousands of miles per hour.

These platforms would be located both in the upper atmosphere and open space. But you know the most amazing thing about the space elevator? This idea actually appeared for the first time in 1895! It was Russian scientist, Konstantin Tsiolkovsky, who suggested building such a construction.

3. A Balloon
Yep, no breakthrough technologies, just alarge helium balloon that would fly to the stratosphere, and then to space, taking along two pilots and up to six tourists. A 6-hour-long flight would cost about $75,000 per person. However, this method has its own disadvantages. First of all, at the end of the journey, the balloon could end up more than 300 miles away from the departure point due to the wind. Secondly, it would take no less than two hours for the balloon to reach space. For comparison, rockets can make it in four minutes. Hey for $75,000 bucks, I’ll take the two hours.

4. An Orbital Ring
The principle of the orbital ring would be similar to that of the space elevator. On the other hand, the gigantic ring would circle the planet, with several points connecting it to ground stations on Earth. Inside each ground station, there would be a mega-fast elevator that would allow you to travel to space.

The orbital ring could be created right in space with the help of minerals found there. Unfortunately, this project is unlikely to get started in the near future because of its enormous costs. On the other hand, they say that orbital rings could be installed around the Moon and neighboring planets, which would help people to colonize new territories.

5. A Skyhook
Um, can you picture a giant fishing hook  which extends all the way from space, and stops somewhere in the Earth’s atmosphere? It’s considered to be a mini-version of the space elevator: after all, it follows the same principle. But instead of reaching the ground, the hook is left hanging in the air. Also, the tower on the ground is missing. So, a rocket first transports the payload to the bottom end of the skyhook cable, and then this huge construction sends the load further into outer space.

6. An Airplane
The chances are that a hypersonic plane with a jet engine that could turn into a rocket would be able to fly into space. Liquid oxygen would get injected into the exhaust, making the engine become a rocket. It would help the aircraft reach enormous speeds. And on the way back, the engine would turn into a regular jet engine once again. Such a plane would be able to cover the distance between Sydney and Los Angeles  in under 3 hours. At the same time, it takes a regular airplane more than 14 hours to travel the same distance.

These pellets would then be sent back to Earth, and the cycle would go on and on. At the same time, electromagnetic accelerators lining the walls of the ground chambers would send the payload into space. Unfortunately, even though this project sounds cool, it would require incredible amounts of energy.

See for yourself: a space fountain with the space chamber about 1,200 miles away from the surface of Earth would need the same amount of energy as a whole city! By the way, would you prefer to take a space elevator or a space fountain to get to space? Write about your choice in the comments below!

8. A Space Cannon
As the name suggests, this machine could shoot payloads right into space. One of the proposals is to build a 3,600-ft-long space projectile and place it somewhere below the sea at the equator. The only visible part would be the top of the barrel and a rig, which would be holding it above the water. If it was built, it would cost a mere $250 to send one pound of payload into space. The only drawback? It couldn’t be used to launch humans to space. The compression would be too strong for anyone to survive such a trip. But we’d get a bang out of it!

9. A Launch Loop
This ginormous construction would be built of magnetic cables covered with special protective material. Both ends of the launch loop would be firmly fixed on the ground, and the center of the track would rise high up into the sky, just like a section of a giant roller coaster. A space train would set off from one side of the loop, and by the time it reached the middle of the track, it would already be in space. Unfortunately, the construction would cost a fortune to build.

10. A Mass Driver
Also called an electromagnetic catapult, this innovative kind of transport would resemble a maglev train. It wouldn’t have any wheels – instead, large magnets would help the driver to slide over the rails. The so-called train would move inside a tube, the top of which would reach the upper atmosphere. On the other hand, it would still be held to the ground by powerful metal beams.

If this project saw the light of the day, it would cost just $5,000 instead of about$60 to $80 million per seat to send astronauts to the International Space Station. Wow, isn’t that impressive? But what if you don’t want to wait and would like to set off to space right away? Then I have a bunch of ideas for you! For example, you could apply for participation in the Mars One mission.

The organizers were looking for volunteers who wanted to set up a colony on the “Red Planet” However, this idea would have two big drawbacks. First of all, you would never return back to Earth. And secondly, the company that was preparing the mission went bankrupt in January 2019, after they hadn’t managed to raise the $6 billion needed for this venture.

Another option would be to take a trip on Virgin Galactic’s commercial space plane. This amazing machine made its maiden flight in December 2018, and soon, it might take the first space tourists to an altitude of 50 to 60 miles. That’s the height at which you stop being just a traveler and turn into an astronaut.

The drawbacks? The flight will last just 2 and a half hours, and you’ll probably have to sell your house to pay the $250,000 price for the journey. If you aren’t ready to spend a fortune to see our pretty blue ball with your own eyes,you can use the services of a space delivery company and send your substitute to space.

Usually, delivering a package to the Moon costs about $1.2 million per 2 lbs. But if you use the delivery services, it’ll cost you way, way less to have your photo or some other small meaningful object delivered to the lunar surface. And finally, you could simply become an astronaut. Then you’ll have all the rights to see our planet from above! There, easy peasy! Yeah, right.