That’s Why Helicopters Never Go on Everest – Climbers get stranded on mountains with frightening regularity lately. Their way down may be blocked by avalanches, landslides, or other damage to the route. So, if people can’t escape from mountain tops on foot, why not rescue them with the help of helicopters? After all, these machines can land anywhere, right? Good question!

But it turns out that there’s a serious reason why choppers don’t fly all the way to the top of high mountains like Everest. Helicopters simply aren’t designed to rise to such altitudes. So, first, let’s figure out how these machines work. In fact, you can describe the way helicopters fly in just one word: lift – which is the force that counteracts gravity!

Yep, it’s the very same lift that helps planes stay airborne! But while aircraft generate lift with the help of their wings, helicopters need rotors to perform this impressive feat. The blades push air downward, which allows the chopper to move upward, despite the force of gravity. But the lift produced by the rotors greatly depends on the density of the air. 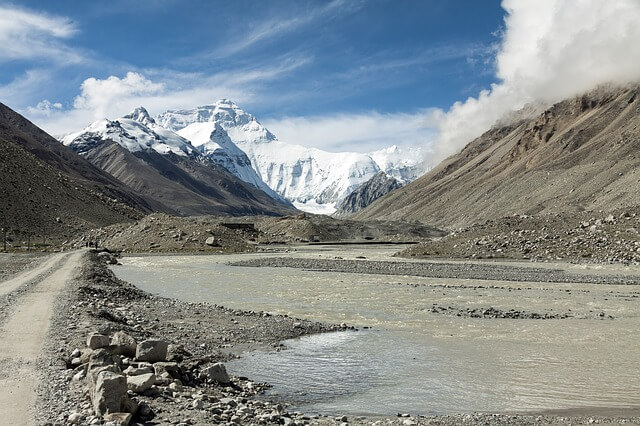 The higher this density is, the more comfortably and safely a helicopter can fly. But once you begin to rise above sea level, air density starts to decrease. Ever heard of people who couldn’t breathe at high altitudes in the mountains? That’s because of the lack of oxygen in the air. So, returning to Mount Everest – it’s the highest peak in the world.

At the top of this mountain, which reaches 29,030 ft, the density of air is only one-third of that at sea level. It means that the lift this air can provide is also three times weaker than it is in standard sea-level conditions. And you should also keep in mind that a chopper needs to support not only its own substantial weight, but also the weight of its crew, passengers, and cargo.

In other words, the air at such altitudes isn’t dense enough to hold helicopters aloft. On the other hand, there are special helicopters that can fly way higher than regular ones. They not only have larger blades and extremely powerful engines, but they’re also very light. As you might guess, it costs a fortune to produce such a chopper.

Normally, helicopters don’t need to fly higher than their usual altitude of 10,000 ft, so they aren’t equipped with such instruments. At the same time, there’ve been several helicopters that did make it to the peak of Everest, more than 29,000 ft above sea level. The first time it happened was in 2005, and the pilot who controlled that chopper mentioned later that landing was the hardest and most dangerous part of the trick.

He couldn’t understand where he was landing and whether he was going to touch down on snow above rock, or snow above nothing. Also, pilots who fly high-altitude helicopters in the mountains must constantly calculate how much power they’ll need for maneuvers like hovering, taking off, and landing atthis or that altitude.

By the way, temperatures and air pressure also define how safe a trip is going to be. Besides, pilots have to avoid landing choppers in places where there’s even the slightest chance of a landslide or avalanche. All this requires not only incredible experience and skills, but also a good portion of luck. Well, I guess that answers my question about why helicopters and high places are incompatible.

But hang on, there are some other things that confuse me about choppers! For example, why do some helicopters have wheels while others land on the skids? Well, almost all early choppers had wheels, just like airplanes. But since emergency landing sites were often just plowed fields, the front wheels of helicopters used to dig in, which made a forward-moving machine highly unstable during landing.

On top of that, in sloping areas, wheeled helicopters sometimes rolled downhill. That’s why skids soon became standard for all smaller helicopters. This way, they’re able to land on soft surfaces and in hilly areas. Besides, skids can be equipped with special floating devices for landing on water.

And finally, the skids are super-convenient for strapping additional external loads. As for moving on the ground, a chopper is either transported on a dolly, or with the help of special ground handling wheels. But the larger a helicopter is, the more difficult it gets to handle it on the skids. That’s why most massive choppers are designed with wheels.

They help large machines to taxi safely, plus, they’re more convenient for rolling landings and takeoffs. Have you seen more helicopters with wheels or with skids? Share your experience in the comment section below! Then, another question that’s bothering me is, “Why do helicopters need two rotors?” I know that the big one overhead is the main blade.

It provides the necessary lift and produces motion. But how about the tail rotor? What good does it do sitting there at the end of the chopper? Well, without the tail-end rotor, helicopters would just fly in circles!Look how it works: to get a chopper into the air, the main rotor must move and push the air down, which, in turn, will push the heavy machine up.

But “for every action, there’s an equal and opposite reaction” (No, that’s not my idea – it’s Newton’s third law of motion!)It means that if the chopper’s rotor moves clockwise, its fuselage would be pushed in the opposite, counter-clockwise direction. That’s when the tail rotor comes into play.

By rotating, this near-vertical set of blades makes sure that the helicopter doesn’t start moving in circles in the air, and remains stable during the flight. Ever seen helpless choppers stuck in the air, rotating in one place? They most likely had their tail rotors damaged. Now, I was also wondering if helicopters could fly in the rain.

It turns out that theoretically, they can. The other question is whether they’re allowed to. Rain alone does nothing to affect the ability of a chopper to rise into the air. After all, blades still rotate, and thrust still takes the machine upward. On the other hand, rain means low visibility.

And according to the rules, choppers can fly only when visibility is good, so that pilots can see where they’re going. That’s why, unless a mission outweighs the risks, helicopters prefer to rest in the hangars during rainy weather. Ok, and how about flying at night? Actually, it’s the same as with flying in the rain: choppers can do it but prefer not to.

Unlike airplanes, which fly at an altitude of several thousand feet and have established routes, choppers must stay at much lower heights. Besides, their routes are more flexible. As a result, helicopters avoid flying in the dark due to the risk of hitting something,which always ends badly, both for the machine and its crew and passengers.

Also, one day, I saw a cool photo where a chopper was performing an incredible trick:it was flying upside down! It made me pretty suspicious: was it Photoshop or what? Nope! Some helicopters can indeed fly upside down, but it’s by no means an easy feat! Once again, a helicopter rises into the air thanks to the lift produced by its powerful rotors which spin at insane speeds: more than 500 revolutions per minute!

So, it makes sense to suppose that since a chopper rises in the air thanks to its rotors spinning, it could do so even when inverted. Admittedly, it would be inconvenient, but not unreal altogether, right? Only in theory. Unfortunately, most commercial choppers simply aren’t designed to perform such feats.

In these helicopters, the joint that connects the fuselage and the blades is too weak to handle the weight of a belly-up machine. Also, the blades themselves aren’t rigid enough. Should the chopper turn over, they’d flex, come too close to the fuselage, and eventually crash against it. You can imagine the fatal outcome of such an accident.

On top of that, to fly upside down, a chopper needs its engine to be redesigned; otherwise,the fuel and lubricant wouldn’t be distributed inside properly. In any case, most modern helicopters can pull the barrel roll trick, but only for a few seconds at a time, and while being controlled by an expert pilot. By the way, nowadays, choppers are so advanced that some experts state you’re more likely to survive in a helicopter crash than when an airplane goes down. Well I feel better.

Why the U.K. Runs Empty Trains Every Day

Why Nobody Can Survive in the North Pole