How to Survive a Tornado – The furious winds of a hurricane, impenetrable blizzards, or the stifling heat of a drought– these are horrible manifestations of nature’s wrath – also known as Bad Weather! But not many of them can compare to the fastest winds in the world. Whirling up high, turning fields into wastelands, tearing trees out from the ground, and ruining towns – that’s right: tornados. More Bad Weather. Still, survivalists say that anyone can prepare for a twister! So let’s find out how to survive a tornado!

The first how to survive a tornado and most important thing any experienced weatherman, survivalist or tornado chaser will tell you is you need to know what you’re dealing with. Without a clear understanding of what exactly a tornado is, every other tip or piece of advice has a good chance to fall flat and do no good after all.

A tornado can emerge even when there’s no storm or rain. It comes without knocking; and its formation is sudden and quick. It might take only a few minutes before a tornado starts to wreak havoc upon everything in its path. Most of the time they appear in the summer when the ground is heated and the upper parts of the atmosphere are influenced by cold winds brought on by thunderstorm supercells.

The hot air tends to produce updrafts – an ascending stream of warm air. At the same time, thunderstorms bring rain and a descending stream of cold air called a downdraft. As you can imagine, these two rapid air streams colliding with each other isn’t a great thing for anyone. Warm air can’t flow higher up and cold air can’t go lower. The force of their collision creates a spinning wall cloud right below the level of the parenting storm. 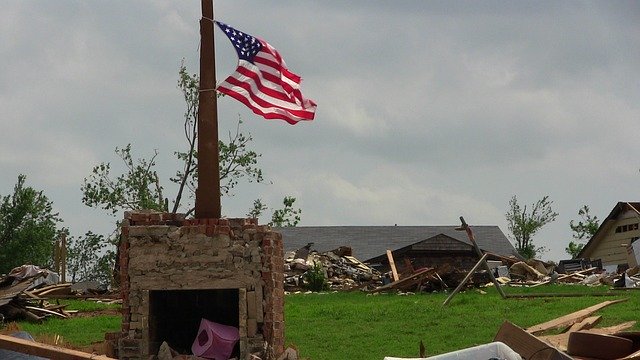 With time, both the updraft and the downdraft become stronger and stronger. It eventually produces a vertical column of spinning air that starts to suck debris from the ground like a giant drain. This is when the funnel of a tornado appears from the spinning wall cloud. It makes its way down from the cloud to the ground as if the storm itself tries to suck up the earth with a long weird snout.

And it won’t shy away from taking everything for a ride. The force of the thing is immense. Just try to imagine: a tornado can be up to 2 miles in diameter. The wind speed sometimes surpasses 300 mph, and the speed of the funnel itself traversing the land is somewhere between 25 to 40 mph; but in some cases, it can reach 70 mph. You wouldn’t want to race with something like that, and it’s certainly not a welcome guest in your back yard.

But what can you do to avoid meeting a twister or how to survive a tornado? The main way to assure your safety is to be aware of your surroundings, and plan in case a tornado comes your way. Most tornadoes happen in a warmer time of year, and their favorite place on Earth must be the US. In fact, there’s even a term: ‘Tornado Alley’, which includes most of the Southeastern and Midwestern parts of the country.

But don’t think that you’re safe outside of these regions! Believe it or not, tornadoes have appeared in the middle of winter, and in the least obvious places. Meteorologists are still working hard on gaining more knowledge about tornadoes and the origins of their formation. Considering a warning is your best chance at survival, it’s a good thing they figured out how to predict them for the most part.

And more than that, you too could become a tornado spotter. These are specially trained people that can detect the very first signs of a storm that can produce a tornado. There are more than 230,000 of these vigilant storm-watchers across the US. Their main task is to see if the storm is a supercell producing a wall cloud.

They’re not really hard to see: it looks like a giant bulge in the cloud base that starts to spin as an updraft from the ground strikes it. The moment they see a wall cloud starting to split into bands called ‘beaver tales’, they know that they’re looking at the birth of a tornado. But how do they know which way to look? This is where technology comes into play.

Meteorologists use weather radar, which is based on the Pulse-Doppler method. Pulse-Doppler radars can detect raindrops and effectively calculate the distance to them and their velocity. Based on that information, meteorologists can form a full picture of changes in the weather.

The same radars can detect rotation in storm clouds from more than 160 miles away. When observers confirm the first signs of upcoming tornadoes, the emergency warning will immediately go off. You would need to sit in a bunker to miss this one, because it’ll be literally everywhere.

Speaking of bunkers, you would probably be glad to have one nearby, or at your own disposal,if you’re about to weather something like an F-3 category tornado. And there are 6 of these categories, so you can imagine what you’re up against with anything stronger than an F-3. If you still can’t, here’s a quick rundown for you.

An F-0 tornado is more like a land spout – it won’t cause any significant damage. To be safe you would need to just trim the tree branches closest to your windows so they won’t break them. Otherwise, your home is your castle. An F-1 tornado, with wind speeds up to 110 mph, is more of a concern. Hope you don’t live in a mobile home; and if you do – find another place to hide.

Tornadoes this strong can easily push a mobile home off its foundation. An F-2 tornado can tear small trees out from the ground. Any mobile home would be destroyed by it. Even the roofs of well-constructed houses will partially crumble under the furious wind,blowing at 160 mph. An F-3 tornado is where the real trouble begins. The wind speed can get up to 205 mph.

All the upper parts of houses are in danger, and any debris caught by the wind become lethal weapons. These tornadoes can lift cars and break brick walls. F-4 and F-5 tornadoes are the rarest, but also the most dangerous. If you ever hear that something like that is coming your way – it’s best to find a bunker, safe room, or an underground shelter nearby.

These monstrosities can make buildings literally come off the ground, and cars fly in the airfor 300 ft. Fortunately, there are a lot of shelters that are specifically built to protect anyone from tornadoes and storms; and you don’t really need to have a personal one for yourself. But what would be nice to have is an emergency kit, just in case.

The most useful things for a survival kit would be rain gear, flares, a radio, a first-aid kit, an air horn, a flashlight with some extra batteries, a mechanical can opener, at least 3 gallons of water per person, a stock of ready to eat meals, and some walkie-talkies. Make a stash with all of that somewhere in your house, and you’ll always be prepared.

The worst-case scenario is if a tornado catches you off guard. Imagine you’re driving a car and suddenly a twister appears in front of you from a huge rain cloud. What would you do then? how do you survive a tornado? The first thing that comes to mind is to just turn around and drive away from it as fast as possible, but, that’s a poor choice of actions.

The best way to avoid a tornado in a car is to figure out the direction it’s going and take a course about 90 degrees from this direction. But remember, if it is close to you – don’t think that your car will protect you. It’s not only the wind that’s scary about a tornado. More so are the debris that it spins around; it could severely damage your car in a matter of seconds.

How do you survive a tornado? It’s best to leave the car and stay as far away from it as you can. In this worst-case scenario, your best option is to find a ditch, lay low, and cover your head with any possible means. Still, any nearby building’s basement would be a better hiding place, except the big ones. Shopping malls or cinemas could be extremely dangerous if you want to hide from tornadoes.

The myth that larger structures are safer is just a myth. And that’s not the only myth about twisters. Telling them from the truth may be crucial for surviving a disaster. One suggests that it’s better to open windows during a tornado, and that’s as false as it gets.

Wind going through open windows could lift whole floors or a roof with ease!More than that – it’s important to leave windows closed and to stay away from them until the whirlwind is no more. Another important misconception is that smaller tornados are weaker and less dangerous. That’s also not true.

A lot of F-4 tornadoes were no wider than just 300 ft in diameter, but they did a ton of damage. Twisters aren’t stable, they change their shapes constantly. So don’t just trust your eyes – all tornadoes are equally dangerous. No matter how small or slow-looking a twister is – try to not underestimate it, and always use every method of avoiding trouble.