How To Escape And Survive An Active Minefield Alive – There are an estimated 110 million landmines left in the world, unexploded and just waiting for the wrong person to wander by, sometimes even decades after the conflict that saw them laid down is over. Mines don’t discriminate, and kill long after the fighting has stopped. They are difficult to detect, even more difficult to safely clear out, and often their presence alone simply forces people to abandon entire towns and villages.

In Afghanistan, some areas of the country have been mined so frequently by different powers that the mines lay in layers like geological layers of the earth, and in the former Yugoslavia you can still find mines disguised as children’s toys along stream banks, with soldiers releasing them by the dozens into the fast flowing waters so they would kill and maim their enemies downstream.

If you’re a world traveler, there’s always the risk of stepping off the beaten path and into a literal danger zone, and today we’re going to find out how you can get yourself out of a minefield. Mines come in a variety of different types, some are designed to destroy vehicles and others are meant to kill or maim personnel. 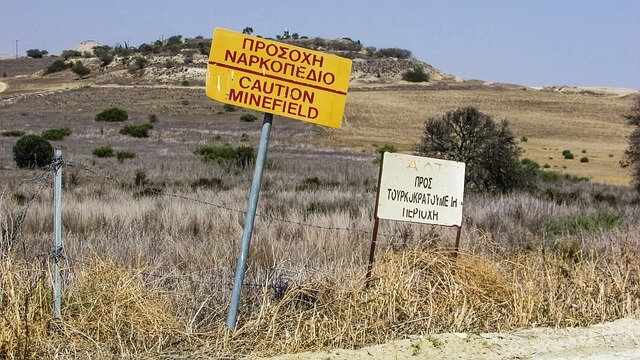 In combat, a wounded enemy is better than a dead enemy, because the casualty will force other soldiers to risk their lives to save their comrade, thus many anti-personnel mines aren’t made to outright kill an individual, but rather just to simply maim them. Anti vehicle mines are designed to take out heavy trucks and tanks, and you could stand on top of one or even do jumping jacks and never set it off.

Even more sinister, some mines are designed to detonate only on the second, or third activation,thus killing or wounding soldiers who travel along paths thought safe from mines. Generally speaking mines come in two varieties. Anti-vehicle mines direct an upwards explosive blast meant to penetrate the soft underside of a vehicle, while anti-personnel mines explode and generate a great deal of shrapnel so as to inflict maximum injury.

Some mines such as the American clay more mine are set up above-ground, but most mines areburied by dirt layers so as to make them more difficult to spot. Modern mines can be deployed by aircraft, and some are even able to self-bury in looses oil a few inches. Other mines, typically those employed by terrorist or asymmetrical forces, are little more than disguised IEDs.

And historically these have taken the form of children’s toys or objects that appear valuable- these are designed to kill and wound civilian populations rather than military personnel, and are particularly insidious in their design. The average mine responds to downwards pressure, triggering off a pound-per-square inch sensitivity limit that is preset by the manufacturer or the mine layer.

Some modern mines can have their sensitivity adjusted so that they only respond to greater amounts of pressure- this way they avoid being detonated by small animals or children, and will instead detonate when a soldier steps on them. Most mines simply detonate their explosive while on the ground, while others contain a small amount of explosive charge which boosts the mine up into the air before a secondary explosion in the main body showers the area in lethal shrapnel.

The infamous German S-mine, or Bouncing Betty, from World War II is the best example of one of these self-elevating mines, and proved to be wickedly effective at causing mass casualties. These mines generally achieve a lower absolute kill count, but instead achieve a far greater casualty count, and often this is the preferred outcome.

In combat, it’s better to wound many enemies than kill a few, as it will lower the amount of firepower your enemy can bring to bear and force him to divert resources to care for the wounded. So what could you do if you found yourself stuck in the middle of a minefield? How could you get out and survive with most of your limbs intact?

First is the most obvious, turn around and retrace your steps, making sure that you step exactly in the same spot you did when you were blindly walking into the mine field. This of course is not a foolproof strategy, as mentioned before some mines are designed to detonate only on the second activation, and so just because you didn’t blow up the first time you wandered into the mine field, it’s no guarantee you won’t blow yourself to bits on the way out.

The best thing to do is to stand absolutely still and call for help. If you’ve wandered into a mine field then there’s probably a good chance that there’s someone in the local area whose job it is to clear mines. Let’s say you’re all alone though, and simply staying put is not an option. Well, we’re not going to lie to you, getting out of an active mine field alive or with all four limbs intact is going to be a pretty slim proposition.

Despite what you may have seen in the movies, it takes trained experts many, many days to successfully clear even just a small portion of a minefield. You, on your own, are probably not going to fare so well. If you’ve got no other options though, well, you could try and mark your own way out of the minefield.

You’ve probably seen it on tv, a soldier crawling on his belly feeling the dirt in front of him with his knife for mines and marking off when his trusty knife ‘clinks’ into one just below the surface. Well, it’s better than nothing, but in all likelihood this is probably still going to get you killed.

However, ‘probably’ is a better bet then ‘definitely’, so get your trusty knife, or find yourself a nice, long and thin branch that is hopefully within arm’s reach. Now, mines respond to downwards pressure, so if you prod into the dirt in front of you at a forty five degree angle and make sure to do it nice and easy, you have a decent chance of not setting off the mine you eventually prod into.

If possible, you instead want to slowly prod the dirt in front of you with your stick to a depth of about a foot, and then if you hit nothing, move your stick while still buried in all four cardinal directions: north, south, east, and west. You ideally want to ‘bump’ into a mine from the side while your stick is still buried,because even coming down on a mine at a forty five degree angle can be fatal.

You should be able to feel pretty firm resistance from a mine when your buried stick bumps into it, and trying to move your stick gently along the edges of it will let you know if you’ve truly hit a mine or just a rock. This is going to be incredibly slow and painstaking work- remember how we told you that it takes professionals days to clear a small minefield? You’re going to want to keep clearing the dirt in front you inches at a time.

Everytime you sink your probe into the dirt, try to move it about two inches in each direction,then if all clear, move four inches to the left or right of where you were, and do it again. Once you’ve cleared half a foot or so laterally in front of you, move your probe four inches ahead of you and do it all over again.

Think of it like a typewriter, and you’re clearing the ground in front of you row by row. Once you’ve cleared a few feet like this, you have to make a decision. How badly do you need to get out of this minefield? Are you injured and in need of medical attention? Are you in some kind of danger- other than, you know, blowing up at any second from buried mines.

If you need to beat a hasty retreat out of a minefield, you can use a technique to attempt to clear the path in front of you after you’ve cleared out a few feet with your probe. First, you’re going to want to lower yourself to the ground in the area you’ve cleared. Then, take something heavy- as heavy as you can find, and prepare to throw it ahead of you.

This works best if you have a rope you can use to throw it far and then pull it towards you, dragging out a path which should detonate any buried mines. You’ll want to lay on the area of ground you’ve cleared with your feet towards the direction you’re throwing your pack, because your head is more important than your feet and you’ll want to protect it from any exploding shrapnel.

By staying low you’ll avoid much of the shrapnel flying through the air as the mine explodes outwards, and should avoid the majority of the worst effects of a self-elevating mine such as the infamous bouncing betty. So, hopefully you have a backpack and a length of rope, because you’re going to throw that backup as far as you can ahead of you and quickly lay down with your feet towards the backpack.

Then simply drag the backpack towards you and hopefully set off any mines in your way. Remember though, not all mines go off on the first activation, so repeat this process a few times if nothing goes off. After the third or fourth time, you got yourself a path that maybe is clear of mines.

We have to stress that in no way is this technique perfect, but it beats dying of exposure or of your wounds if stuck in a minefield. The sad truth is that outside of specialized equipment, even the best trained and armed soldiers in the world can do little to save themselves when stuck in a minefield. Odds are then that you, with no training and no equipment, are probably going to fare much worse.

The techniques we highlighted in this video are in no way perfect, but if push comes to shove, they are the best chance you’ve got of making it out alive from a very terrible situation. How would you try and get out of a minefield? What other How To scenarios would you like to see us tackle? Let us know in the comments.