Effects of Junk Food for the Body If Consumed Continuously – We all know that junk food is no good for us, and yet it remains the most popular type of food in the world. Once the bane of American waistlines, who found themselves the butt of jokes around the world, now people all over the globe are experiencing their own obesity epidemic thanks to the proliferation of fast food in their countries.

Modern lifestyles have caught up with people everywhere, and long work days with short breaks typically make for quick meals, and nothing makes for a quicker meal that helps you hate a little less your soulless corporate nine to five like a big mac and fries. It’s not just fast food though that’s plaguing our waistlines and eroding our health, it’s other ‘junk food’ items which are made to be quickly consumed, effortlessly prepared, and taste great despite having poor or little nutritional content.

These are things like any number of pre-packaged cakes and pastries, ready to eat meals that only need microwaving and are loaded with sodium and low on nutrients, and processed meats made from the more questionable parts of an animal that are pre-sliced and ready to slap between two pieces of bread for a quick, convenient sandwich. Of course that bread is a problem as well, because white bread is notoriously low on nutrients, and most manufacturers use a healthy amount of sugar to sweeten the bread- especially in the United States.

Modern life can be stressful, and the sad truth is that more and more people are spendingless time preparing and actually eating meals than ever before. If you read our previous article on why you should eat slower, then you know that Americans lead the way in shortest time spent eating, averaging about 64 minutes of undistracted eating- that is time where eating is the primary activity as opposed to eating and working. 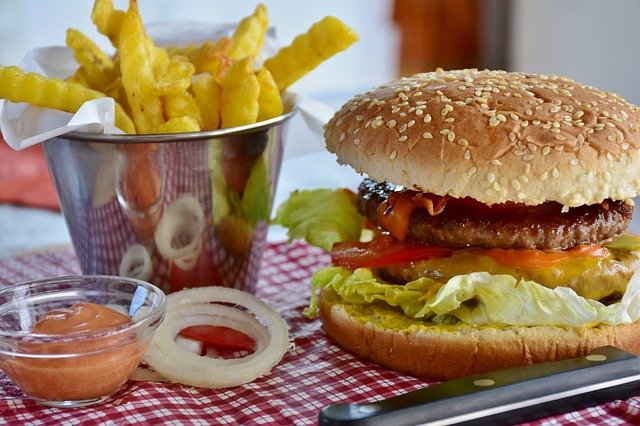 Even nations that have historically made meal time a long, extended affair such as in Spain have seen time spent preparing and eating meals drop precipitously over the decades. Again, modern life and its fast-paced lifestyle is to blame, and with time spent preparing and eating food going down, many people are opting for faster-to-make meals with lower nutritional value.

In Britain though one boy has paid dearly for his poor nutritional choices, or given how young he was when his troubles started, we should say that it was his parent’s poor nutritional choices to blame for his condition. The parents claim that this child was a very picky eater, and would refuse any food that wasn’t chips, french fries, plain white bread, and processed pork products.

If you’re familiar with the food pyramid you’ll quickly realize that this kid’s food intake resembled less a pyramid and more a pillar, made up primarily of grains and meats. White bread though as we mentioned is notoriously nutritionally deficient versus say wheat bread,and processed pork can have even less nutritional value than actual pork cuts- steaks and pork chops- as it’s made out of the ‘leftover’ pieces of the animal after these cuts have been removed from the carcass.

Also, things such as bologna typically have a great deal of sodium, nitrates, and preservatives added, which when over-ingested can wreak havoc on your health. French fries or chips also lose much of their nutritional content when they are fried, which is why health experts encourage people to bake their french fries instead, or eat baked chips rather than traditional fried potato chips.

Like story of this boy, his parents did none of this, and due to his refusal to eat anything but these foods, they allowed him to continue eating this diet. At age fourteen he went to the doctor- for our fellow American viewers who might be unfamiliar with the term due to the extreme costs of healthcare in our nation, a doctor is a person who heals you when you are sick, and in civilized countries it doesn’t cost your life savings to do so.

The child complained of extreme fatigue, though his parents failed to inform the doctor of the child’s diet. A year later he returned, only this time the child was complaining of hearing loss and vision issues. Now doctors became concerned, and they immediately tested his blood only to discover he had extremely low vitamin B12 levels.

Vitamin B12 is very important for the body, it helps do a great deal of things such as make your DNA and create red blood cells, and you must get it from animal-based foods. Apparently the processed pork the kid was eating wasn’t getting him enough vitamin b12,so the doctors put him on a series of b12 shots and gave the parents dietary advice.

Sadly, the now-teenager refused to follow his new diet, though he would start and try only to quit and go back to his regular diet. His vision continued to decline and by the time he was seventeen years old, he was fully blind. By then he not only had an extreme vitamin b12 deficiency, but he also had low copper, selenium, and vitamin D levels, along with a high zinc level and reduced bone density-all because of his extremely poor diet.

Even if he fixed his diet though, the boy would never see again. Despite his nutritional condition though, the teenager had a perfectly normal body mass index, and had no outward signs of malnourishment. This is what makes non-fast food junk food so insidious, and the damage it causes so difficult to spot- you can look perfectly fine on the outside, while on the inside your body is slowly breaking down because of a lack of nutrients.

The teenager’s poor diet had led to nutritional optic neuropathy, a condition in which a lack of nutrients begins to affect the function of the optic nerve. Typically though this condition is seen in nations with starving populations, or with individuals who are unable to absorb nutrients from the food they eat or have bowel issues.

Due to the emergence of processed foods though, this condition is now appearing in people who simply eat extremely restricted diets. Sadly, had the teenager changed his eating habits even just a year before his vision went completely, he likely would have made a full recovery. After so long of terrible nutrition though, the optic nerve had degenerated enough to permanently blind him.

His hearing has also been affected and there’s concern that the damage the brain has suffered may manifest with mental illnesses later in life. Parents of the teenager today report that he suffers from extreme depression due to his condition and has dropped out of college. His mother has had to quit her job to become a full-time caretaker and though they tryto improve his diet, he still refuses to eat better food.

While this story is typically reported along with images of fast food, it’s important to note that it was not fast food that harmed this teenager. In fact, fast food would’ve probably been healthier than what he was eating- aside from weight gain issues. Instead, it was the extremely restricted nature of his diet, helped along with the fact that not only was he eating a very narrow list of foods, but those foods happened to be extremely processed, which further reduced their nutritional value.

What this means is that no, you yourself aren’t going to go blind just from eating fast food or processed foods, and only run the risk if you too adopt such an aggressively limited diet. Researchers now believe however that the teenager in question actually suffered from a psychological condition known as Avoidant Restrictive Food Intake Disorder, or ARFID.

A relatively newly diagnosed mental disorder, ARFID was only added to the Diagnostic and Statistical Manual of Mental Disorders in 2013. Individuals affected are more than just picky eaters, and that term only serves to imply that the individual is poorly disciplined or spoiled by caretakers. Instead, people with ARFID actively avoid some, or many food items, because of severe anxiety that they suffer when eating them.

Sometimes individuals may even experience extreme emotional discomfort related to the actual texture of the food. When attempting to eat one of these unwanted foods, individuals experience gagging and vomiting, which only reinforces the desire to stay away from these foods. Some individuals even experience intense fears of actually choking to death if they were to consume the foods they fear.

Psychologically unable to eat anything outside of their extremely restricted diet, individuals with ARFID can quickly become malnourished. This british teenager however was a rather extreme case, and most people have only a small or moderate list of foods that they cannot eat. Psychologists still don’t understand what triggers conditions like ARFID, but much like anorexia and other eating disorders, the condition can be improved with professional help.

Sadly for the british child in this story, his condition was missed, likely by an understandable lack of knowledge of the condition, and his fate was sealed. Still, with their child’s health steadily decreasing, it begs the question of why his parents didn’t seek out other professional help when traditional medical help wasn’t resolving the issue.

In the end, we should carefully balance how much junk food we eat, but unless you’re eating such an extremely limited diet, you’re not in danger of going blind anytime soon. Are there any foods you refuse to eat? Do you know anyone with ARFID? Let us know in the comments.

What is Coronavirus? (Causes, Symptoms, Diagnosis)

Gym Mistakes You Must Avoid

What Is Stone Man Syndrome

What Is Alien Hand Syndrome

Why You Should Never Swallow Gum

What Happens When You Drink Alcohol on an Empty Stomach?

This is What Really Happens When You Start Exercising