Aliens May Have Visited Earth But We Haven’t Seen Them – Hey, you still waiting for a visit from the little green men? Sorry, but you might’ve missed that one by about 10 million years. A new study claims that aliens do exist, and they’ve already visited our planet! They just haven’t come back in a looong time… Published in The Astronomical Journal in August 2019, the study points out that extra terrestrials could be taking their sweet time getting to our planet.

Why? Because they likely rely on the movement of star systems since they make crossing the universe easier. You see, stars and planets move around the center of our Milky Way, and they pass one another occasionally. And the Milky Way galaxy itself is also rotating! The study argues that aliens could be waiting for one of those destinations to move closer to them. This could be a reason why they haven’t visited us.

The study itself delves into a theory called the Fermi Paradox. It asks, “If alien civilizations do exist, why haven’t we found evidence of them in our galaxy?” The paradox is named after Italian-American physicist Enrico Fermi. Back in 1950, he was having lunch and discussing recent UFO sightings with his colleagues. 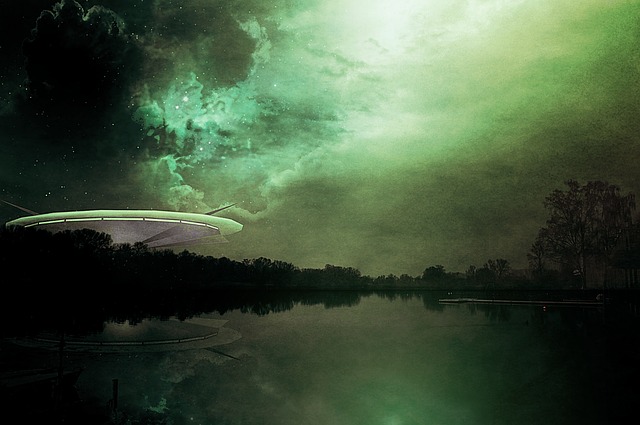 When they started talking about how these UFOs would have to travel faster than the speed of light to get to Earth, Fermi could only wonder, “But where is everybody?” That is, if they have this technology, why don’t we see more of them more often? It doesn’t make sense if there are billions of stars and planets where intelligent life could’ve evolved to the point of having interstellar travel.

This Fermi Paradox forced scientists into two camps: either no one ever left their planet,or we Earthlings are the only advanced life form in the whole galaxy. But this 2019 study sheds new light on the question by explaining why they haven’t visited us. Makes sense, but there are plenty of other theories why aliens seem so uninterested in our little rock.

It’d be like you or me going to Venus and trying to breathe in pure carbon dioxide!Never mind that it’s also so hot there, that we’d melt before we even got a whiff! And they likely know about this. Those fancy saucers they’re flying can probably measure the conditions on a planet from afar. They’re purposely not making contact with a planet they wouldn’t survive on.

Chances are they’ve come near Earth but decided to keep moving on. There’s also something like a Zoo Theory. You’d think these super intelligent beings would have advanced space suits to protect them from harsh planetary conditions. If that were the case, then aliens aren’t interested in us because they probably see us as primitive beings.

They choose not to make contact, much like we don’t go up to wild animals and try to talk or reason with them. Maybe we haven’t been able to communicate with aliens simply because we have such different ways of communicating. If they have tried making contact, how would we know?We communicate with radio signals and sound waves.

They might use some other system completely unimaginable and unintelligible to us. What if this difference makes us invisible to one another?And, of course, there’s the theory that they’ve been among us all this time – they’re just particularly good at hiding. Hmm, you’re not an alien, are you?Ok, just checking…Anyway, can’t talk about aliens without mentioning crop circles! These massive and perfectly geometrical figures have been a source of extraterrestrial speculation all over the world for decades.

One of the first incidents occurred in the 1960s when an Australian farmer supposedly saw a UFO rise up and fly away from his land. He then discovered the reeds and grass lying flat in a clockwise pattern. Many believe extraterrestrial beings are to blame and that these images may serve as away of communication for them or possibly even landing sites.

But the only evidence so far points to creative humans with a lot of spare time on their hands. One man even admitted to doing it himself back in the 90s. If it is E. T. s, then England seems to be their favorite spot for drawing weird pictures in the countryside, particularly around Stonehenge.

And that brings me to another popular alien theory. Author Erich Von Daniken proposed that Stonehenge served as a landing site for aliens. Because many of the stones weigh about 25 tons, he found it impossible that humans constructed the monument 5,000 years ago. Other ancient sites believed to be built by aliens include Peru’s Sacsayhuaman, the Egyptian Pyramids, and Teotihuacan in Mexico.

So far, there’s no way of proving that extraterrestrials constructed these mysterious monuments for one reason or another. Ok, so what if humans did come in contact with aliens? What would they look like? Some experts have suggested that aliens may look completely different than what we expect. Popular drawings and caricatures show similar features: long limbs, large almond-shaped eyes set on egg-shaped heads, and green or gray bodies.

These little green men typically land on Earth aboard a flying saucer. But the chances that they’d look so similar to us  are slim. Lifeforms evolve depending on their particular planetary conditions. So, for example, if the gravity on their home planet is quite strong, they’d likely be more horizontal creatures rather than vertical like us.

The most bizarre alien theory is called the “panspermia hypothesis”. It turns all the others upside-down and claims that we, humans, are the aliens! This is the idea that life did not originate on our planet, but rather on other worlds. How did we get here? Simple: we started as bacteria that were later transported to Earth by meteorites! Ah, humble microbial beginnings… The Earth does serve as a model when thinking about life on other planets.

Life exists in extreme conditions on our home turf. You can find creatures in the deepest oceans, on top of the highest mountains, in the heat of the hottest deserts, and even in the frozen soil of the tundra. That would justify our most recent obsession with Mars. It contains water and some of the same conditions – found on Earth.

Could the Red Planet be something like Early Earth? It’s interesting to think about! A recent poll found that 20% of Americans believe aliens have visited our planet. And those numbers might start going up any time now! In the summer of 2019, US Navy pilots admitted to seeing UFOs. Now, remember that UFO doesn’t necessarily mean there’s a little grey dude in there– it simply means they couldn’t identify what this flying object was.

But they are strange alright! These UFOs seem to defy all laws of our physical world. They’re incredibly fast and can change direction in the blink of an eye. The majority of these events are left without explanation. The most popular states by the number of reported sightings are Vermont, Montana, New Hampshire, Alaska, Maine, and California.

All witnesses describe similar things: bright lights, typically in a V formation, in the night sky. Citizens also describe that same erratic movement, and then they just vanish. Could witnesses in totally different locations be seeing the same type of object? Or are they simply describing what’s been accepted as UFO behavior without really witnessing anything?

Well, the more people that report the same sighting, the more credible it might be. But we still can’t know for sure… Sightings and interest in UFOs have been on a steady decline since 2014. Some of this can be blamed on the development of technology. Since people have a whole world of information right in the palm of their hand, they can stay better informed versus relying on questionable fuzzy videos.

Plus, most of us always have our smartphone on us, so it becomes a legit question when someone claims to have seen a UFO: “Well, why didn’t you take a video of it?” Or maybe people simply don’t care anymore! We’ve all got our noses buried in social media – we probably wouldn’t even notice a UFO right above our heads! Or even an alien right behind this microphone! Is there advanced life beyond our planet, and have they visited us? Let me know what you think down in the comments.